A small black and white print of ‘The Tennis Fan’ by Louis Wain, fixed into a beautifully made and very unusual custom frame, dating probably to the first half of the twentieth century.

The tennis-playing cat is a motif that Wain visited quite a few times in his work, but this particular image was reproduced only rarely. It was chosen to advertise the V&A Museum’s 1972 Wain Exhibition (see our Blog post), but is hard to find elsewhere.

This is an unusual piece, and one where the frame is as much of a star as the artwork. The image is a print of one of Wain’s ink sketches and features a wide-eyed cat with a tennis racquet leaping for a backhand stroke. We are not sure of the source of this print; it might have been made specifically for framing, or could have been taken from an annual or other publication. A definitive answer would require opening the frame for further investigation, but if you look at the rear side of the piece you will see why we are reluctant to do this!

The frame has been closed with a rare historical technique which uses a canvas backing with a gummed string seal. The frame-maker’s stamp has been applied to the canvas; it is rather faint but clearly reads A. Stewart, Verulamium Hill, St. Albans. The rim is wooden and finished with a gold paint, which has mellowed in colour over the years and ‘distressed’ to reveal traces of a duck-egg blue undercoat in places. For us this adds enormously to the charm of the piece, and to open the frame or restore the finish would ruin the natural patina that has developed, so we have simply carefully cleaned the glass and offer the piece for sale ‘as is’. The eyelets and hanging wire are old but may not be original.

We have found it quite tricky to put date on this piece; we estimate somewhere between the mid-1910s to the mid-1950s.

Wain is one of the world’s best known feline artists. After studying at the West London School of Art he began working as a freelance artist specialising in animals and country scenes, providing illustrations for a number of London journals.

During his wife Emily’s illness he began to produce sketches of Peter, a stray black and white kitten they had rescued, which were later published. While his early work was naturalistic, Wain is most famous for his later humorous anthropomorphic cats with which he satirised the fads and fashions of his day.

He worked with a number of charities, including the Society for the Protection of Cats, and hoped “to wipe out the contempt in which the cat has been held” in England.

“He has made the cat his own. He invented a cat style, a cat society, a whole cat world. English cats that do not look and live like Louis Wain cats are ashamed of themselves.” H. G. Wells on Louis Wain

Condition Report: The print is in good condition, with good whiteness to the paper and no foxing or tanning present. There is a degree of cockling towards the left-most blank edge but this does not unduly distract from the printed image. A small number of tiny particles are trapped between print and glass (ingress of tiny flecks of the frame). The frame is solid and undamaged and is ready to hang; the gold-painted finish is somewhat distressed with a lighter grey-blue tone showing through in places, but we feel that this adds rather than detracts from the charm of the piece. (Explain this)

Framed or Unframed: Framed (See our Framing Guide for help) 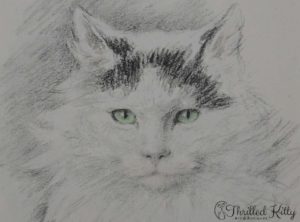 ‘Pudgy’ by Lucy Dawson, a charming print published in the 1946 edition of her book Neighbours and delicately hand-coloured by a later artist. Presented in an 8 inch by 10 inch Daler-Rowney Antique White mount and ready to be framed. 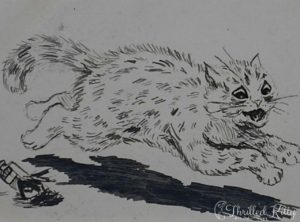 Louis Wain-style sketch on blank postcard, a charming humorous drawing with personal dedication, dated March 16th 1901. Presented in an 8 inch by 10 inch Daler-Rowney Black mount and ready to be framed. 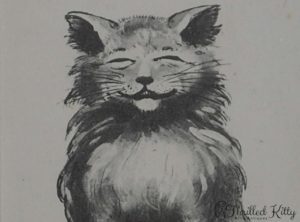 ‘You Make Me Laugh’, a charming sentimental American postcard dating to 1913. Presented in an 8 inch by 10 inch Daler-Rowney Black mount and ready to be framed. 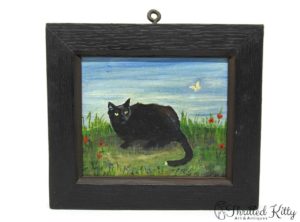 ‘Tom Tom’, a black cat encounters a butterfly amongst the wild flowers. A small and very sweet oil on board, painted in July 1982, in original frame and ready to hang. 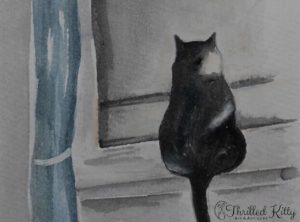 ‘Inconspicuous Bird Watcher‘ by Karen Spooner, an original watercolour sketch on cartridge paper. Presented in a 10 inch by 12 inch Daler-Rowney Snow White mount and ready to be framed. 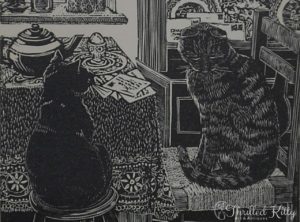 ‘Breakfast Cats’ by Hilary Whyard, 1983, a finely detailed short-run wood engraved print, signed and titled in pencil by the artist. Presented in an 8 inch by 10 inch Daler-Rowney Black mount and ready to be framed. 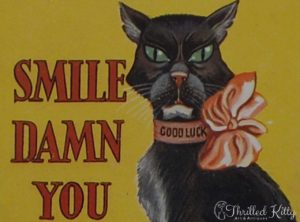 ‘Smile, Damn You, Smile’ by Bob Wilkin, a colourful humorous postcard printed in London circa 1930. Presented in an 8 inch by 10 inch Daler-Rowney Black mount and ready to be framed. 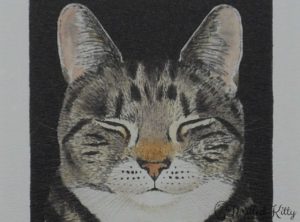