Home / Blog / Articles / What is an ACEO painting? 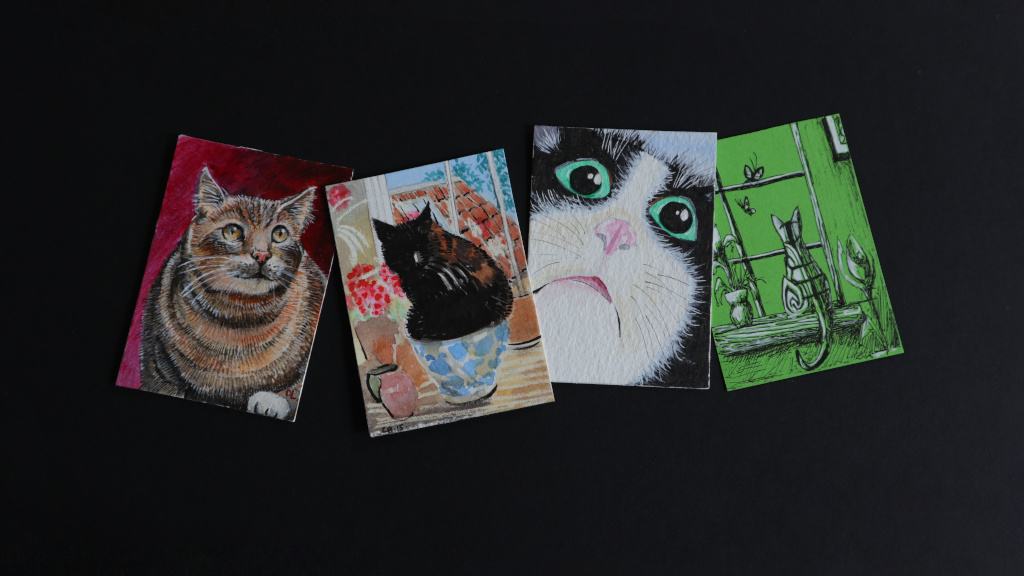 The term ACEO stands for Art Cards, Editions and Originals. It is a miniature artwork format measuring 2.5 by 3.5 inches: about the size of a standard playing card. It is simply by adhering to this precise size that a miniature artwork qualifies as an ACEO; there is no limitation on medium, materials or subject (although at Thrilled Kitty, of course, the subject is always cats!).

We’ll dig into the history behind these miniature marvels below, but to learn more about our feline-featuring ACEOs – and how we get them ready to brighten your walls – skip ahead to the end!

The ACEO is a twenty-first century phenomenon, but the traditions underpinning miniature art can be traced back many centuries to the illuminated manuscripts produced by medieval scribes, and back further still to the small illustrations found in the very earliest books (or codices), which began to appear in Egypt and the Roman Empire in the first century AD.

This ancient history is the source of our word ‘miniature’. The root of the word, by a quirk of etymology, has nothing at all to do with size but is instead a reference to colour. The Latin verb miniare means ‘to apply minium’. Minium, or red lead, was a bright orangey-red pigment which was typically used for initial letters and headings; the person who did this work was called a miniator. The same pigment was dominant in the simple, decorative drawings with which the ancient scribe-artists illustrated their codices.

Over time, the association of the word miniare with illustrative drawings became deeply rooted. As early Italian evolved from Latin, the word’s use broadened to the point that its common meaning was ‘to decorate a manuscript’. Gradually the word miniatura arose, referring to the art of illuminating: adding illustrations to a text. The ancient link to the colour of red lead faded.

As manuscript illustrations were very small in comparison to other paintings – such as the painted wooden panels common as altarpieces, the vast frescoes in pre-Reformation churches and the huge canvases employed by Renaissance artists – the meaning of miniatura expanded to refer to any small painting. By Shakespeare’s time the word ‘miniature’ began to appear in the English language, borrowed directly from Italian.

In Shakespeare’s sixteenth century England a craze for miniature portraits grew amongst the nobility, driving the evolution of the art form. Building on the techniques of the manuscript illustrators, artists produced tiny images of their wealthy patrons which were often given as intimate keepsakes to family or suitors. Early examples were typically painted in watercolour – often on vellum stretched over card – and mounted in a frame or jewelled locket. Later artists worked in enamel on copper or watercolour on ivory. Portrait miniatures remained enormously popular until the development of photography in the nineteenth century.

Elsewhere in the world independent styles of miniature painting flourished, springing from their own traditions of scholarly illumination: the Jain and Buddhist palm-leaf manuscripts found in India, for example, and the glowing, intricate illustration of Persian texts. By the late sixteenth century the muraqqa – meaning ‘that which has been patched together’ in Persian – was popular with collectors across the Islamic world. A muraqqa was an album containing specimens of miniature painting and calligraphy. The source material for an album might be compiled over many years, drawn from old manuscripts or broken-up books, although the wealthiest collectors employed their own calligraphers, artists and craftsmen to produce the finest possible examples. The popularity of the muraqqa encouraged artists to produce stand-alone miniature artworks for their own sake, rather than primarily as decoration for manuscripts. 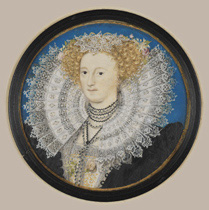 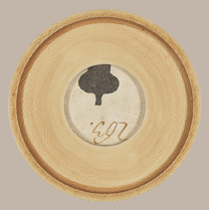 So how does the muraqqa and posh portrait miniature link to the twenty-first century ACEO? Nicholas Hilliard – one of England’s most celebrated miniaturists, who produced tiny portraits of Sir Francis Drake, Sir Walter Raleigh and James I during his career – frequently exploited playing cards as a readily-available source of fine, stiff card as a base for his work, but calling these Art Cards is a bit of a stretch.

In some art movements of the nineteenth and early twentieth century – as art increasingly broke free from the domains of aristocratic collections and exclusive salons – small works on paper and card were traded between artists as examples of their experimental techniques and mediums. Such miniature pieces might also be sold for a small sum, or exchanged for food or lodgings.

It was in the late 1990s, however, that the concept of Artist Trading Cards (ATCs) was formalised. The Swiss artist M. Vänçi Stirnemann began producing small artworks – 2.5 by 3.5 inches – in 1996. The following year he held an exhibition followed by a card trading session. This was a collaborative performance: anyone was free to participate, working to the trading card size restriction but using any medium, style and technique they wished, with the crucial element being the meeting and exchange between artists.

ACEOs are a direct of offshoot of the collaborative ATC movement. ATCs were intended only for exchange between artists, but the concept proved popular and the idea of creating such miniature pieces as affordable art for the wider public gained traction. The name ACEO (Art Cards, Editions and Originals) was coined to differentiate cards for sale from cards for trade. The small, strict size format encourages experimentation with style and medium by both emerging and established artists, and has resulted in compact and highly collectable artwork which is also reasonably priced; pieces from well-known artists, though, can command steep prices.

We’re big fans of ACEOs at Thrilled Kitty, and you will find a number in our collection at any time. Some people like to compile albums of art cards – in the style of the Persian muraqqa of old – but we prefer to see them framed and displayed where they can be enjoyed every day.

When an ACEO passes through our workshop, we usually set it in an 8-inch by 6-inch Larson-Juhl mount, making it ready to drop into a suitably-sized frame of your choice. If the artist has produced a Certificate of Authenticity for their artwork we attach it to the rear of the undermount with acid-free fixings. Many artists omit these certificates, but it is common to sign, title and write other details on the back of the card; we photographically reproduce these on an extra gallery label which again is attached to the undermount.

As always, we use Fine Art Trade Guild certified conservation-grade materials, and employ low-impact techniques to ensure that the piece can be safely removed and remounted in the future if desired, preserving the artwork and protecting your investment. You can read more about our methods in our guide to framing and displaying your artwork.

New cat-themed ACEOs regularly find their way into the Thrilled Kitty inventory; if you follow this link you can see the full range of miniature marvels currently in stock on our site.

Incidentally, if you are a collector of traditional portrait miniatures you might enjoy browsing the stock of our good friends at Celia Rose Antiques, based in the village of Felpham, West Sussex. They specialise in eighteenth and nineteenth century miniatures and have a stunning range of fine examples available.

If you have enjoyed this article, you are warmly invited to join our mailing list for our occasional newsletter, which will keep you up to date with our latest finds, our exclusive special offers and all the fascinating catty odds and ends we uncover along the way.